Sometimes the best laid plans don’t turn out as expected and then 2016 happens to you.

Right in the middle of it , you take a moment to finally see how far you’ve come from the life you had and the person you were. A moment destined to be captured in a Half Year post.

Now I’ve written [ like many of us] yearly round-up posts , mostly ending up feeling older and not as much wiser . The Half time alternatively can be introspective and forward-looking. Almost like being in two realities. In plain English , one does realize one is getting older and time is passing by but there is still half a year to go to give another chance to be wiser.

Honestly , by the end of the year , one tends to over look the tiny little moments that happened throughout the year coz only the BIG 4 or 5 stick around in your head. You lose them for something far more significant to be documented and kept alive forever through your blog. But those moments matter and they are fresher in your memory when general enthusiasm is still alive.

If it were any other year , I would have done a different post. About 10 people who made a difference or 5  trends that mattered  or some such trivial banality that one seldom gets effected by for half a day and moves on.

But its 2016. The #YearOfMe that started with such a bang , in fact I even have a measure to judge how much I’ve accomplished through a carefully crafted #VisionBoard [ that I first spoke about here] . Here’s my journey so far in the three dimensions of my being. 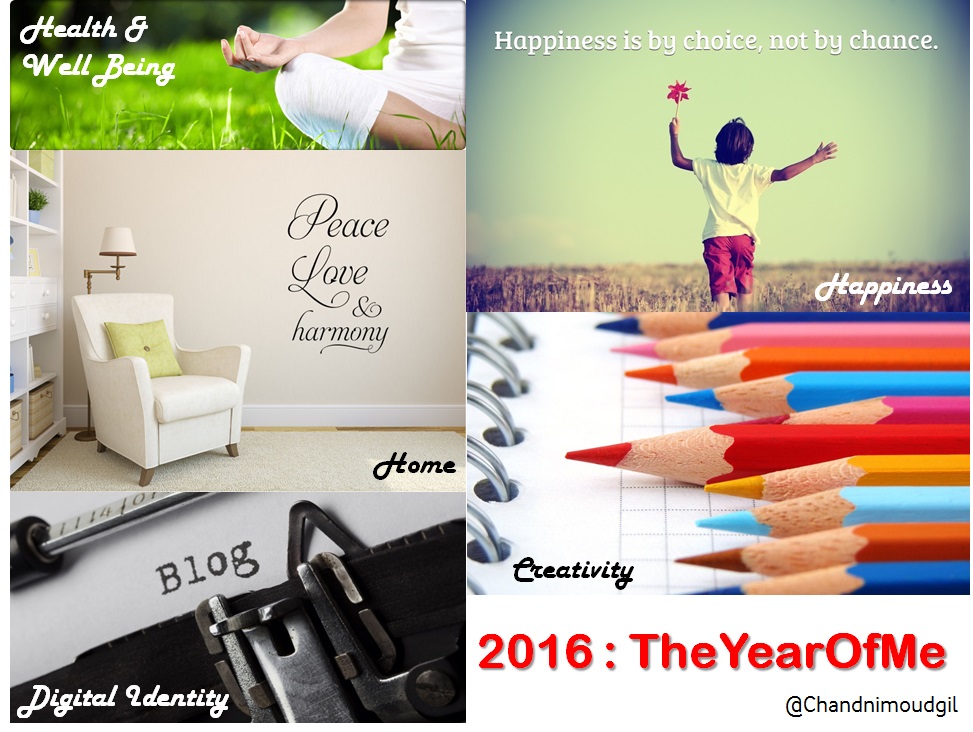 Home: The one word that conjures up so many feelings. Of love, warmth, comfort , financial independence , sense of belonging. I finally put together my very first home and I say that with so much love and pride that I want to do a happy dance before I type another word right now. I wrote about it here and if you happen to drop by often , I shall be doing it for a long long time now.

Creativity: I would like to call myself a creative person but and this year I thought of using this part of my being to really bring me contentment and happiness.  Being involved with BlogChatter for their creative communication and ideas has been fulfilling , it has actually been a high point of my first half. Writing 26 short stories for AtoZChallenge & publishing an eBook was a life changing experience . Which sets tone for my next area of interest.

Digital Identity: I was consumed with this idea . That of creating a space in the third dimension. Something beyond personal and professional. I was sure that social media is that space for me where I would create a niche as an entity. My views that would be beyond the gender to which I belong , my opinions that would not need a stamp of a borrowed last name or a corporate white-collar designation.  Digital Identity for me beyond the tags and labels that I carry. As the year progressed , I have figured out the kind of content drives me , moves me and what I can really create . I just have to work to make the whole story sharper now. An intangible achievement for an intangible idea but a considerable win.

I have always believed that the sum of parts is bigger than whole . That applies to the little joys [ like winning the SportsChatter contest   or writing more posts in half a year than in many many years put together or taking up a daily blogging challenge when I barely had time to breathe] adding up to much bigger than larger gains. Health is definitely and area that would define my next half objectives and priorities but the sum total of all these elements have contributed in a large way to my Well being and Happiness  on the whole.

Beyond the Vision board , some of the highlights of the half a year gone by were

My Kid starting school . I don’t write often about being a parent. I feel I am very raw and vulnerable when I talk that language. It’s too personal but this post captures that moment incase you wish to share my joy with me.

I got a much deserved and long-awaited promotion. The one I didn’t expect and the one that makes me feel that I am worthwhile [ Not that needed any accreditation but recognition at work matters to me and I am too arrogant to seek it ]

And I met so many kind , happy , interesting people. We draw so much energy , strength positivity and inspiration out of people. If you don’t agree with me , you are in denial. I am truly grateful [ and I am not a very grateful person ] that I’ve had the chance to share ideas and listen to them , it’s a blessing.

If you feel 2016 has been as kind, as exciting , as liberating , as engaging and as amazing so far for you as it has been for me , go ahead and share?

This post was written as a part of the Half Time BlogChatter Campaign  for Blog Buddies. I am a part of Blog Buddy Mavericks – a bunch of diverse and interesting bloggers and this initiative was undertaken as a group exercise to take #Mavericks2016 to the top in the Blogging challenge. So go ahead share this post and help us out 🙂

This post has some awesome links . You may want to click on them to explore my space a bit more. Do leave a note nevertheless and happy HalfTime to you!